A new record distance to a huge galaxy named GN-z11 has been observed and measured. It is dramatically farther than the previous distance holder. The constantly amazing Hubble Space telescope measured its distance spectroscopically at a Spectral line Redshift of 11.1.

“We’ve taken a major step back in time, beyond what we’d ever expected to be able to do with Hubble. We managed to look back in time to measure the distance to a galaxy when the Universe was only three percent of its current age.” – Pascal Oesch, lead paper author.

Previous to this discovery, the furthest measured galaxy, EGSY8p7, is at a redshift of “only” z=8.68.

Due to its large spectral line redshift, researchers calculate that this large (billion solar masses) galaxy is being viewed only 400 million years after Big Bang; . . . which presents a major set of headaches for Big Bang.

“It’s amazing that a galaxy so massive existed only 200 million to 300 million years after the very first stars started to form. It takes really fast growth, producing stars at a huge rate, to have formed a galaxy that is a billion solar masses so soon,” explains Garth Illingworth of the University of California, Santa Cruz and Lick Observatory, one of the paper’s co-authors.

Because Big Bang (LCDM) requires matter to be so smoothly distributed, it takes considerable time to create stars, and then for those stars to gather into a galaxy.

According to Big Bang the first atoms were created some 380 thousand years after universe start up, and until recently, most of us believed the first star began shining about 400 million years later. (1)

However, leading researchers European Space Agency’s PLANCK mission updated the Big Bang Timeline in 2015 by reporting the first generation of stars did not light up until some 560 million years after the Big Bang.

This new extraordinarily, unexpectedly distant galaxy, GN-z11, raises a calamitous, and likely fatal problem for Big Bang. That’s because there is no reasonable way to explain the existence of a huge, complete galaxy (not the mere starting formation of a galaxy) in the “blink of an eye.” Only ~ 400 million years after the first atoms were created. (For reference it was “only” 400 million years ago when Earth’s first creatures left the ocean and evolved into dinosaurs.)

The impossible part is that this gigantic, completely formed galaxy we can see today existed 160 million years BEFORE Big Bang says the first stars lit up !

This also is a big problem for the “cosmic microwave background” idea because all the  cosmic microwave radiation calculated as being “background” – had to have been been emitted at the same time as the light was emitted from the huge galaxy GN-z11 !

So much for “Precision cosmology.”

This appears to expose a disastrous flaw with Big Bang and that the conjecture needs, at the very least, a serious re-boot. 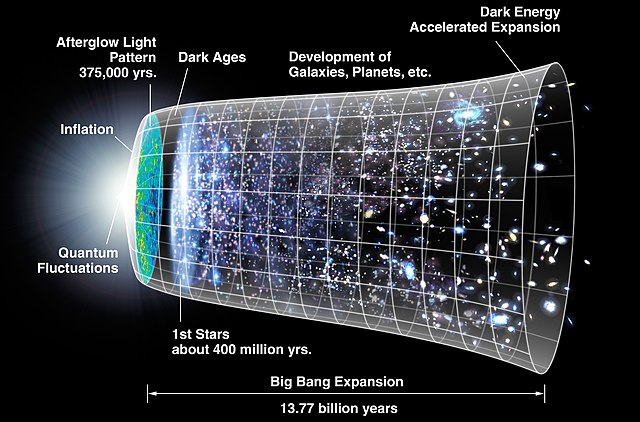 Thanks to John Kierein for alerting me to this research.

The last part of the galaxy’s name, GN-z11, as you might have guessed, reflects its redshift number, and “z” is shorthand for spectral line redshift in Cosmology.

An interesting Book putting this in perspective is available at Amazon:

The Poster below (at Amazon) is of a previous record distance galaxy.