Will a Higgs Boson Discovery be Announced in July? 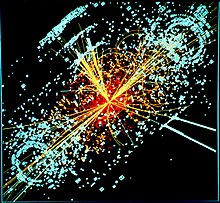 Today I ran across lots of excited rumors on Particle Physics websites that a Higgs boson might be announced at the upcoming International Conference on High Energy Physics in Australia. (The Higgs Boson is a never-observed particle that allegedly “give mass” to particles essentially creating gravity forces.)

Should you place a bet that a Higgs particle has been found ?

My answer is closer to —

“No” than — “that would be extremely silly.”

Why? Remember how a chain is only as strong as the weakest link?

There are a couple of darn weak links in this chain of frenzied rumors.

There was a weak signal seen at a mass/energy of 125 billion electronvolts in 2011 that almost everyone speaks of as though it is a Higgs particle. Even if the signal gains traction with the new 2012 data, there is no evidence that the signal has Higgs properties.

For comparison a Proton “weighs” a bit less than 1 billion electronvolts (0.938 GeV).

2. The signal is so weak, its reality can’t be discussed outside statistical terms.

Q: Is a Higgs particle important?

A : Slightly. If one is found it might help us understand what we call the “Higgs Field.” This is a field (or a set of fields) that provides gravity and mass.

“Q: Are particle physicists sure there’s a Higgs particle?

“A: Absolutely not! (ed: Thank you Matt Strassler)