Many science afficianadoes assume we can accurately predict the future locations of planets in our solar system.

It appears as though our many planets make completely predictable orbits . . . and Kepler figured out that orbital motion is simply ellipses – right ?

Even though great minds like Kepler, Poincaire and Euler have worked intensely for centuries on this problem in Celestial Mechanics, as much as Mathematicians would like you believe Planet orbital motion can be described perfectly with some equation(s) – well, sorry, it can’t. Not kidding.

We’ve known for centuries, thanks to Kepler, planet orbits are not perfect circles. Well, contrary to what you learned in college physics, it turns out they aren’t perfect ellipses either and that’s also been known for a centuries.

We can fairly reliably estimate the motion of two bodies orbiting each other.

However, when we add just one more object, totaling three (or more) – it becomes bothersomely difficult and probably not (analytically) solvable at all — even if we confine the motions of the three objects to a flat plane.(1) 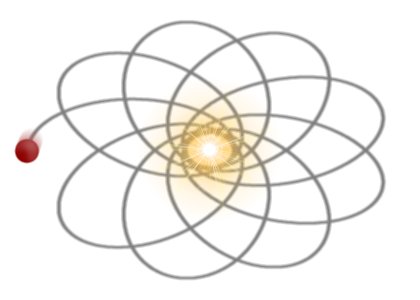 Its even a bit more annoying than that because the effects of gravity and electromagnetic force work at infinite distances. So in physical reality there actually is no such thing as a two-body system (even ignoring the abundance of moons, planets and binary star systems).

In addition, confoundedly, the orbit of a planet around the Sun is not really an ellipse but a constantly changing flower-petal shape due to the gravitational attraction of the other planets. (And there is yet another “flower petal aberration” that will have to wait for another article.)

Nevertheless, the “solvable” part, called the “Two-body problem,” predicts fairly well the motion of two co-orbiting objects of any size, for example a planet orbiting a star, or our Moon orbiting Earth.

A “Three-body Solution” (if there was one) could be used to predict the motion of three objects, say Earth and our Moon orbiting around our Sun because it turns out our Moon does not follow a beautiful Keplerian ellipse.

Or you might like to know with great precision how all our planets (and their moons) move around our Sun.

We can estimate their future positions, but the more distant future our predictions aim at, the less accurate they become.

“. . . we cannot predict [our neighboring planets’] angular positions within those stable orbits for more than about 20 million years.“(2)

This estimation problem extends to motion of our neighboring stars around our Milky Way galaxy.

“But” you protest, “Planets move fairly smoothly around our solar system, and stars seem to move reliably around our galaxy. There must be some Mathematical way to describe their motions.”

Well, all is not lost. A few clever people have figured out ways to estimate orbital paths of many objects. The key term here is “estimate.”

A Perturbation theory starts with a good solution to a related problem, then uses mathematical analogies to estimate the answers. For example: For an orbital position problem, we could begin by calculating for circular planet orbits (which is not accurate, but it is close), then adjust the results for the observations which are much closer to an ellipse.

As you might imagine, these methods do not work when the analogies break down, such as when there is a phase change.

So while we can get fairly good approximations of where a spacecraft (or a star) will be in the next few days, no one can yet tell us exactly where a given object will be in the distant future.

So what does this have to do with cosmology?

Well, the first thing that occurs to me is the calculations of star locations while orbiting in a spiral galaxy and how that relates to galaxy rotation curves. However, that’s a huge subject, so lets save that for another time.

It is not widely appreciated that because it is a many-body problem, calculating the Orbital Precession of Mercury’s Perihelion cannot be done exactly or directly.

That leaves some 46.5 arc-seconds unexplained. This is where Einstein’s General Relativity stepped in to provide 43 of the needed 46.5 left to help move Theory closer to observations.

(Oddly, Einstein apparently used Newtonian Mechanics to calculate the bulk (5,500 arc-seconds) of Mercury’s precession and only used General Relativity to calculate the last 43 arc-seconds. If true, that is seriously flawed and embarrassing – to the entire physics community of the past Century.)

This means Mercury’s Precession has to be calculated with . . . you guessed it –Perturbation theory — that necessarily employs inexact mathematical analogies . . . and are at best only approximate, but — no one knows by how much.

Does this inspire any questions?

“But what if Mercury’s perturbation due to other planets wasn’t correctly calculated? Perturbation theory is a headache area for astronomers and astrophysicists, because it requires the solution of the ‘many body problem’, which we now understand is intractable to pure maths.

There are lots of cunning techniques employed to work around the fundamental difficulty, but have they found all the terms which need to be accounted for in the Newtonian frame?”

What do you think?

1. Actually there are some extremely limited versions of a three-body problem that can be solved fairly well. They are called “Restricted Three-Body Problems.” However, they require assuming that two of the objects are dramatically larger than the third body and that all three are on the same plane. Here you can learn more about a restricted three body problem solution video.

3. Stability of the Solar System, Wikipedia

4. The Perihelion Precession of Mercury, by Miles Mathis

3 Responses to Unpredictable Motion of Planets and Galaxies (Celestial Mechanics)