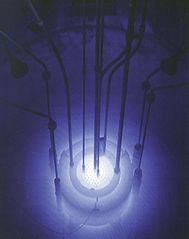 A recent criticism of the apparently Faster-than-light (FTL) Neutrinos inspiring a lot of discussion is the claim that if Neutrinos are going FTL – they must cause Cherenkov radiation.

Why? That doesn’t make sense. And its never been observed so how would anyone test that?

Cherenkov Radiation Requires Charged Particles – But Neutrinos Have No Charge

The beautiful blue-violet glow of Cherenkov Radiation is only caused by charged particles, primarily electrons.

But Neutrinos are neutral, they have no charge. Furthermore, because they are fundamental particles; they don’t have any electrons.

Commentary: Since Neutrinos have never been observed directly making Cherenkov Radiation – why should anyone imagine they should?

This particular suggestion does not seem to hold water.

However, you might want to read why Matt Strassler disagrees. He bases this on the existence of a Neutrino non-zero magnetic moment. My response is that no Neutrino magnetic moment has ever been observed either; it is only postulated.

I do remain concerned that the OPERA experiment is only Detecting Only 1 Neutrino per Hour.

2 Responses to Must Faster-than Light Neutrinos Cause Cerenkov Radiation?